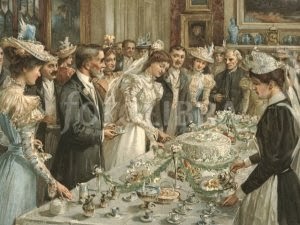 The history of weddings can be divided into two categories: those occurring before approximately 1830 and those after. The timing affected where the wedding was held, what the bride wore, and what guests were served.

Prior to 1830, weddings were very different affairs from the grand, all-night dance parties prevalent today. Typically, a bride and groom married in a church in the morning and followed it up with a brunch-focused reception at the bride’s home.

There also was no true wedding cake at these weddings, not as we know it. In fact, couples served either a bridal pie or loaf of bread. A glass ring was hidden in the pie, the lucky “finder” of which was said to become the next to marry. The bread tradition is a little more disconcerting: it was broken over the bride’s head to symbolize her impending loss of virginity and guests subsequently picked crumbs off her head, dress, and veil to obtain some of her good luck. Yech.

Other foods left out for guests were quite simple - eggs, bread dishes, perhaps some fruit. What was offered was what the bride’s family could afford and, more often than not, what they could make from what they grew or bartered.  Food was served buffet style, because families usually didn’t have enough dishes for everyone.

Why was this the case? Well, during the very early 1800s, much of the U.S. workforce was involved in agriculture. The lifestyle of a farming family simply did not lend itself to extravagant dresses or parties. Then, the economic panic of 1819 hit, the result of which was a change in the nation’s economic focus from agriculture to industrialized production and urbanization. More people had money and lived in cities where more food and locations were available, and so weddings became more extravagant.

With this increased extravagance, gone were at-home receptions. Couples still married in churches, just later in the day, followed by an evening reception.

It was in the 1830s that brides began wearing white dresses and that parties were held outside the home. Prior to this time, it was considered impractical to purchase a white dress, much less one specifically for a wedding, so the bride wore her best gown. The white wedding dress craze (which lasts today) is attributed to Queen Victoria’s choice of the color for her wedding gown.

Food served to guests also changed, and in came wedding cakes and full dinners.  American wedding cakes weren’t like British ones (i.e., fruitcake), but rather similar to what we have today: traditional sugary cake with filling and frosting. (Yum!)

The other food might surprise you, but just because it consists of items not commonly eaten in today’s society. Dishes included cold game (think pheasant), oysters, ices, and poached meats served with aspic (galantines). Food was served buffet style, in the form of how it was traditionally served at a large gala.

Although perhaps not so yummy by todays’ standards, these dishes were luxurious in the 1800s – hence their being served at extravagant celebrations. Of course, you’ll likely select different foods for your reception, but now you know the history that you’re up against.