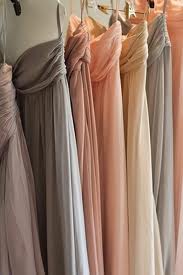 A continuation of last week…

Right now we’ve got a bride, groom, bridesmaids and groomsmen. The job of the first two in that list didn’t change over time (to get married, duh), while the jobs of the latter two underwent personnel, title and job description changes. Caught up? Okay, let’s keep going.

What, exactly, did these bridesmaids and groomsmen do back then?

In addition to dressing their respective member of the couple, bridesmaids and groomsmen were charged with protecting them. Bbridesmaids’ involvement was intended to foil the efforts of evil spirits. For this purpose, they wore white. The idea was that, the more similarly-dressed people in a church, the harder it was for evil spirits to identify the bride, attach to her and, in doing so, ruin her and the groom’s marriage.

In Britain, although centuries passed and no evil spirits succeeded in their…well, evil…plans, the all-white color scheme continued. This, dear readers, is why Pippa wore white.

In America, however, the trend of all-white-clad bridesmaids changed as the country’s social class structure developed. During Puritan times, only white, black and grey-colored clothes were available due to 1) a lack of imports of colored cloths, 2) a lack of imports of dyes and 3) Puritan ideology (colored clothes = showy = pride, one of the seven deadly sins). Therefore, at its very beginnings, bridesmaids wore white because every Puritan female owned a white dress and because white symbolized purity, the reason why a bride wore white on her wedding day. (If you really want to delve into wedding history, the reason white represents purity in Christian countries is because Jesus was covered in a white shroud after the crucifixion.)

As the country and its economy grew, and as some inhabitants became wealthy, many Americans became able to afford dyed fabrics. The appearance of colored bridesmaids’ dresses, therefore, was a symbol of the wealth of the bride’s attendants. The ability to attire bridesmaids in different colors indicated the ability to afford large amounts of clothing dye.

With that, America came full circle in the meaning of bridesmaids’ involvement in weddings.

The history of groomsmen attire is a lot less intricate. Since forever, men from the same vicinity, town or area possessed a piece of clothing that was the same as every other man (for example, a plaid kilt of certain colors and pattern). This showed solidarity and enabled men to easily identify who belonged and who was an outsider. More often than not, this was also the item of clothing the men wore into battle, serving the purpose of allowing fighters to identify who was friend and who foe. The idea of solidarity among men by a show of outward appearance remained intact even as the staples of male clothing changed from tunics to kilts to suits.

The role of groomsmen is related to their unified attire: to protect the couple. Wearing the same clothing allowed groomsmen to identify who was friend and who was foe should an enemy interrupt the ceremony and try to harm either the bride or groom.

(Every wonder why weddings are “formal”? Because, historically, only men’s formal outfits allowed them to wear a sword, thereby allowing him to fulfill his job of providing security).

Today, the roles of bridesmaids and groomsmen are vastly different from the jobs with which their historical counterparts were charged. Essentially, they’re much more fun-centered than protection-centered (And, it’s certainly fine with us here at HJ that weddings are less disruption prone than they were in the past).

Bridesmaid and groomsmen tasks are pretty generally. Both usually:


Who would have thought that, technically, groomsmen have more duties than bridesmaids? Ha!