Why Dogs Shouldn’t Marry Cats, Ever 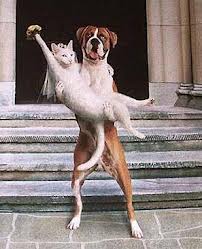 Today, while out walking our dog together, I asked my husband what should be the subject of this blog post. His response: “How dogs shouldn’t marry cats, ever.”

It might be a stretch for some of you dear readers, but not only did that make me laugh, but it also raised the fact that, as of yet, I have not discussed the strain that planning a wedding can put on a relationship.

Before delving further, I want to say that, yes, weddings get cancelled. It happens and is not shameful, but rather something personal for the couple involved. However, for couples that make it down the aisle (which is the vast, vast majority), planning a wedding means fighting.

I’m no psychologist or psychiatrist, but I believe that most couples fight. The intensity, type and amount of fighting differs for each couple, but that fighting occurs at all is almost universal. If you’ve even so much as glanced at one of HJ’s previous blog posts, you know that I repeat “wedding planning is stressful” enough times to turn it into some sort of game. Well, play away, because it’s true.

At some point, you and your partner will fight. You will fight about the wedding; you will wonder why you decided to have a big wedding at all; some of you will even fantasize about running down to the courthouse, tying the knot and then hosting a nice brunch (at least I did).  What you fight about is unknown, but when it happens is not. You’ll fight when you’re the most tired, sick of, frustrated and just over wedding planning, which is always about two months into planning.

At two months, the stress and pressure of planning a wedding hits most couples. The amount of information received from multiple parties (friends, family, complete strangers who notice that you’re not yet wearing a wedding band to supplement your engagement ring, (yes, this happened to me, thank you total stranger at Harris Teeter), number of decisions that need to be made and the fact that all the decisions that have been made are big ones (venue, budget and guest list size) wear down even the most even-keeled couple.*

*As a side note: my husband and I are darn even-keeled, if I say so myself.