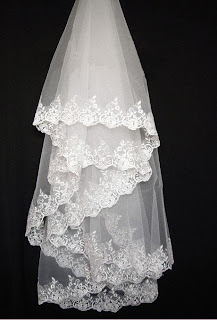 Historically, brides wore veils to protect themselves against evil spirits and dangerous storms. Today, some cultures use veils to hide a bride’s outer beauty so that the groom focuses on her inner beauty.
Many cultures attach metaphorical or religious meanings to bridal veils. For example, in cultures where arranged marriages are practiced, a bride’s conceals her identity until she and her groom reach the altar. In the United States, however, the tradition of wearing a veil symbolizes nothing other than love and romance.
The first record of a bride wearing a wedding veil in the U.S. dates to 1799, when Eleanor "Nellie" Custis, George Washington’s step-daughter, donned one in her wedding. According to legend, when Nellie’s fiancé first laid his eyes on her through a lace-curtained window he fell instantly and completely in love. This romantic beginning prompted Nellie to wear a lace veil at her wedding, which ignited the use of bridal veils in American weddings, a behavior which has since become tradition.
Without such an auspicious beginning to a relationship, however, many brides question which type of veil to wear, and even if they should wear one at all. (My favorite “no-veil” determination was a bride terrified of catching her flowers on her veil and ripping it while walking down the aisle.) Although many times our brides know at the outset whether they want to wear a veil, we sometimes receive questions about the appropriateness and types of veils.
For starters, wearing a veil during a wedding ceremony is always appropriate; it’s the length of the veil the matters. There are 12 types of bridal veils:


Longer veils are considered more formal. Generally, the later in the day the ceremony occurs, the more formal the wedding. Therefore, late-in-the-day ceremonies easily support wearing a waltz, chapel, cathedral or royal veil. Formality may also be determined by the ceremony type, location and the entire bridal party’s attire.
Blushers, in contrast, can be worn at any time of the day. This is mainly due to the blusher’s historical significance of protecting the bride until the conclusion of the ceremony, when the veil is removed from her face.
Veils with lengths falling in between a blusher and waltz can be worn at any time.
Alright, so now you know what this etiquette guru calls “veil etiquette” rules. The tricky part is that, with traditional wedding etiquette being changed to conform to modern times, these rules are not necessarily set in stone.
When selecting a veil, a bride should consider whether it compliments her gown, body shape and personality. Wedding gowns with intricate detailing or stitching usually pair well with veils ending at or before the point of detail. The shape of a bride’s face and the narrowness her dress are also important.
The details on the veil itself are another important factor. Tiering, coloring, and decoration of a veil should enhance the beauty of a simple gown or compliment an elegant and sophisticated one.
In modern America, veils are seen as the finishing touch to a bride’s trousseau, but not necessarily a must-have trousseau element.  More than anything, a veil should reflect the beauty, love, and confidence that the bride feels on her wedding day.