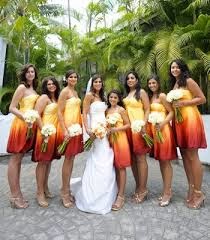 Fashion-forward brides do not only stay atop recent wedding trends, but also set trends. A trend we’ve recently seen instilled by this type of bride is the appearance of ombre.

Ombre is a tonal technique in which shades of color are graduated, usually light to dark. It mainly appears in fabrics, but can also appear in hair colors, ceramics, and lighting.

In weddings, ombre most frequently appears in fabric form, specifically in bridesmaid dresses. Commonly, these dresses display all the shades of the main color of the wedding.

So, why Ombre bridesmaid dresses? Well, there are several reasons:

It’s current but not over the top: ombre dresses offer brides a way to show off their and their bridesmaids’ style as well as pay homage to current fashion. However, ombre fabric patterns aren’t so in-the-now that they’ll end up dating a wedding. Wedding photos in which brides are wearing dyed shoes allow for easily identifying the wedding’s era; ombre dresses, on the other hand, have no such effect since using shades of color in a single dress has been done for centuries.

It’s dramatic without being daring: shades of color on a dress makes bridesmaids stand out, but doesn’t run the risk of being overly eye-catching and, therefore, distracting. This is because the trend isn’t completely new or unseen.

It’s readily available: ombre dresses are offered at most major retailers, making them easy to find and order regardless of where a bridesmaid lives.

It looks good in photos: ombre bridesmaid dresses show up well in photos because they’re intriguing, eye-catching, but do not overshadow the bride and groom. Often, they add texture and depth to photos.

It's interesting: although the trend for bridesmaids choosing individual styles of dress in the same color is not declining, the appearance of ombre dresses is gaining steam because each appears slightly based on the bridesmaid’s figure. Therefore, ombre dresses allow each bridesmaid to appear unique without each wearing a different dress.

It easily matches décor: a bride using shades of a color in her décor might not want to use only one color for bridesmaid dresses. Ombre dresses allow for carrying over the theme of shades of color into the bridal party’s attire.

It's relaxed but still formal: many ombre dresses tend to be long, making them suitable for formal weddings. However, they’re being trendy keeps them from being completely formal. Therefore, they are the perfect combination of formality and informality.

If you’re interested in ombre bridesmaid dresses, go for it! Our recommendations for doing so, however, include:

Use only one style of dress: the shifting of color is enough to make each bridesmaid stand out and catch your guests’ attention. Having multiple styles of dress adds too much variety and can make your bridesmaids attire look unplanned.

Consider your wedding’s venue and tone: ombre dresses are trendy and therefore may not be suitable for traditional or classic weddings.

Tie it in elsewhere: don’t stop at having only ombre bridesmaids’ dresses. Instead, consider having ombre appear elsewhere, such as in your lighting or in your cake’s decorations. This makes the ombre appear more deliberate.